Night is about falling on Nigeria and not even private jets and armoured vehicles can provide enough security for the superrich in the angry and hungry Nigeria of 2015+.

A country where brainless, openly corrupt, criminal minded, occultists, tribalists and religious bigots flaunt unmerited wealth with impunity and have the audacity to vie for high public offices including the presidency.

I visited Nigeria in November this year and witnessed first-hand a lengthy menu of challenges facing the country, the people and the governments (federal, state and local). I saw Nigerians (young, old, male and female) scavenging for a living in competition with dogs, cats, rats and flies at rubbish dump sites; I observed security agents, in uniform and plain cloth, act professional beggars and touts at national ports; I watched local authority staffs turn their offices into private consultancy firms; and I experienced an overpowering sense of grief watching tens of immigration officers (national passport office) sitting/standing idle in an office with only a single computer, piles of dusty files, and high ranking officers with table/mouth-full of food shouting instructions.

I equally observed some “ass-leaking adverts” that sent goose pimples all over my body. In one of the national dailies, one Sir Jude Chika Ejiogu, Chief of Staff to Imo State Government, purchased a one page advert to announce and celebrate the birthday of Imo State Governor’s wife.  He wrote “My beloved wife, Ngozi joins me to wish you the very best as we look forward to many, many more blissful years of celebrations with you and your “iconic” husband, His Excellency, Owelle Rochas Anayo Okorocha (OON)”. I could not help wondering if this Sir of a man actually meant what he published or  craftily cementing his position in government and in the hearts of the Okorochas. I also wondered how a civil servant could afford such expensive advert. Soon I stumbled into another one page advert in honour of Ms Alision-Maduake by an oil and gas contractor. For each letter constituting her name (Diezani), a glamourizing word was carved ( D-Diligent; I-Incredible; E-Extraordinary; Z-Zealous; A-Amiable; N-Noble; I-Intelligent). The leadership of the highly successful and efficient IPIC (International Petroleum Company of Abu Dahbi), an equivalent of NNPC, will feel jealous of this advert.  Only in Nigeria can such advert run without law enforcement investigation into the motives and relationships behind them. I concluded without a doubt that Nigeria is multi-dimensionally sick indeed. Writing on his Mid-November visit to Nigeria, Prof. Okey Ndibe, lamented:

To travel in Nigeria is to become aware of the scale of the tragedy. The roads, especially the so-called expressways, are ghastly. The environment seems an advertisement for blight – with the ubiquitous presence of “pure water” plastic and trash at every turn. There’s nothing like a healthcare system; hapless Nigerians must turn to miracle-hawking pastors and imams. With few public toilets in place, the whole country, sometimes, seems like a vast toilet, with people peeing and defecating wherever they are when nature’s urge arrives.

These concerns, criticisms, obervations or whatever you may wish to call them are not simply a deliberate effort by overseas based Nigerian intellectuals to stir trouble. It is not an attempt to compare Nigeria, a developing country, with Western standards. They are driven by genuine concerns in the light of the vast amount of wealth at the disposal of the country. Let’s remind ourselves of the vast wealth Nigeria and its governments have been blessed with for at least the last 32 years. Table 1 shows the average daily production per year (in thousand barrels) for 32 years. From 1989 there was constant growth in yearly production coupled with souring oil price and gushing petro dollars into the national treasury. To convert this into dollar revenue equivalent will raise one’s blood pressure. Hence the decision to limit the statistics to barrels of oil only. 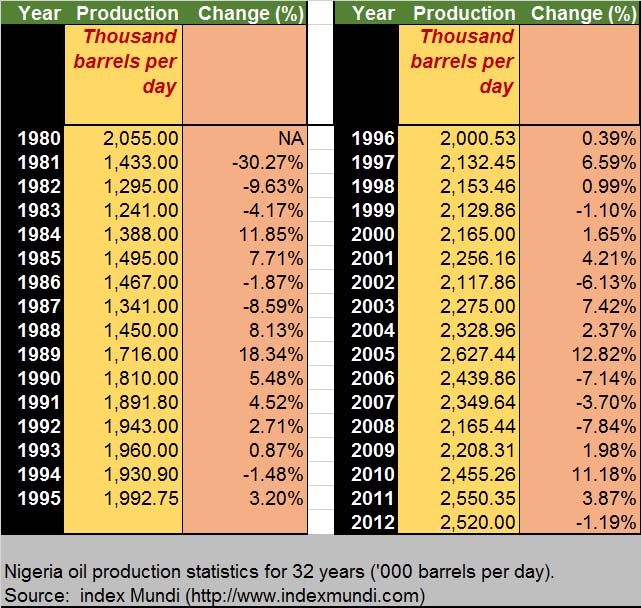 For the good old days of the 1980s to 2012, what have Nigeria, its leadership and hundreds of worthless advisers to show for it?    Please note, Nigerian politicians earn 116 times the national GDP per person of our country. Compare this to UK which stands at 2.7 times (The Economist) and with a productive and accountable politicians. Yet our country is no better than Somalia in economic and security terms. These are but a few of our governments’ achievements:

And I must add:

In a writeup in The Guardian of Dec. 5 2014 on the dearth of elderly mentoring, Adams Abonu observed:

Our dear Nigeria isn’t only passing through trying and interesting times but we have also found ourselves in situations akin to a conundrum recently. From youth unemployment which culminated in the violence and brigandage that made a joke of our commonality recently – Boko Haram conundrum, which proceeds the Niger Delta imbroglio, the reign of kidnappers in the East, etc. – to dysfunctional and derelict infrastructural base which drove away a much needed investment sector, our beloved Nigeria appears to be dancing steadily to the brink by the day.

As at today, Naira is on a free fall, there is a huge drop in crude oil price, the national financial reserves have been gutted by state governors (Economic Minister, Ngozi Okonjo-Iweala), the Nigerian oil and gas industry is slowly but steadily losing its position as a key exporter of crude and LNG to the world market, and Nigeria has failed to diversify its economy robustly. Night is about falling on Nigeria and not even private jets and armoured vehicles can provide enough security for the superrich in the angry and hungry Nigeria of 2015+.

President Goodluck Jonathan, and other officials of his administration, as well as governors and heads of the National Assembly are not letting off any of their conveniences as Nigeria battles dwindling revenues, retaining extra-large convoys and travel teams, and flying private jets and first class with public money while the same government says the nation must accept cutbacks to counter the oil crisis. While the president and the governors have retained their long motorcades, the senate president, David Mark, and House of Representatives speaker, Aminu Tambuwal, are doing just the same.

Official convoys of the president averages 40 cars, those of the governors exceed 20. Mr. Mark’s convoy as of this week remained at least 12. (The Press)