Education in Nigeria: Lessons from Singapore and Finland (Part 1)

Next in importance to freedom and justice is popular education, without which neither freedom nor justice can be permanently maintained”.

“Education is the most powerful weapon which you can use to change the world.

” It is possible to store the mind with a million facts and still be entirely uneducated”.

“The strength of the United States is not the gold at Fort Knox or the weapons of mass destruction that we have, but the sum total of the education and the character of our people”.

The Role of Education

In modern times, education has been marketed in terms of career advancement, higher salary scale, and competitive advantage in the job market. But actually education is about learning, preparing for wise leadership and personal achievement, opening one’s mind to new ideas, and strengthening the competitive advantage of a nation. According to Learningcity.org:

Main purpose of education is to educate individuals within society, to prepare and qualify them for work in economy as well as to integrate people into society and teach them values and morals of society. Education in society prepares youngsters for adulthood so that they may form the next generation of leaders. It will yield strong families and strong communities”.

It is for this reason that “The quality of human resource of a nation is easily judged by the number of literate population living in it. This is to say that education is a must if a nation aspires to achieve growth and development and more importantly sustain it” (Manu Goel, Keydegree.com).

Therefore a good education serves two major purposes – equipping individuals for career advancement and developing citizens for their responsibilities to the people and country.  Consequently, a good education system can be assessed by its ability to equip students with knowledge and skills required to participate effectively as member of society and contribute towards the development of shared values and common identity. A good education system nurtures nationalism and lifetime commitment to motherland. This is very much reflected in Benjamin Rush’s view of what education should cover:

Let our pupil be taught that he does not belong to himself, but that he is public property. Let him be taught to love his family, but let him be taught at the same time that he must forsake and even forget them when the welfare of his country requires it.”

In response to the prominence of the global knowledge economy, the advanced nations of Europe, Asia and America have moved a step above the concept of investment in education into one of investing in knowledge. Investment in knowledge is “defined and calculated as the sum of expenditure on R&D, on total higher education (public and private) and on software… It includes current expenditures, such as on education and R&D, as well as capital outlays, such as purchases of software and construction of school buildings” (OECD Country statistical profiles 2009). The table below is the statistics on investment in knowledge for 18 European and American countries.

Investment in knowledge per country (%tage of GDP) 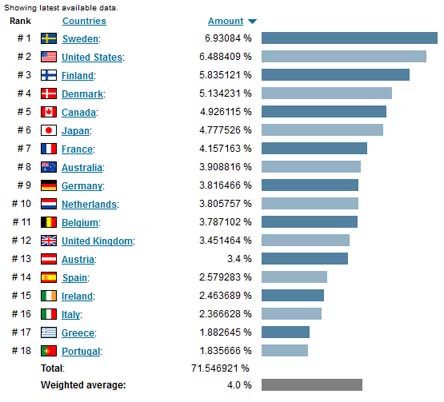 As a confident and patriotic citizen of Nigeria/Africa, I owe it all to education. It gave me the opportunity to travel, work and experience civilizations – from South Africa, Ghana, United Kingdom, Russia, Ukraine, Singapore, Thailand, to many great cities of China, and counting. The privilege of working with professionals from different countries, and active participation in educating, program development/management, pastoring and graduating hundreds of students from different nationalities, races and religious persuasions, is the most rewarding. These experiences have developed a passion in me for change, not only in my country of origin, but throughout the continent of Africa. It is for this reason that I established this charity – Openmind Foundation; for I recognise that deep-down-education is the only way by which our people can truly be free. Not just storing the mind with millions of facts but also having the mind reprogrammed and ready for the challenges and opportunities of the future. As part of this initiative, this article examines the education policy of two highly educationally successful countries – Singapore and Finland.  Singapore and Finland have become world renowned for their education systems, though they achieved their success using quite different approaches.  The history, natural resource limitations and recorded economic, political, social and technological advancements of these countries, make them role models for Nigeria/Africa. First, let’s take a tour of education policy and challenges in Nigeria.

“Over the past decade, Nigeria has been plagued by frequent political unrest. This political instability has generated negative effects on the education system. Although education had been in crisis for many years, the situation has recently been made worse by frequent strikes staged by students, faculty and teachers. Much of the difficulty lies in the fact that the sector is poorly funded. This results in shortages of material and human resources for education: lack of qualified teachers; a brain drain from the public sector; few instructional inputs, shortage of classrooms, and a host of other problems”.

These difficulties have been most pronounced at the foundation levels of education. Both primary and secondary school levels have been negatively affected. In 1997 the Federal Minister of Education, following a nation-wide tour of the schools, stated that the basic infrastructure in schools such as classrooms, laboratories, workshops, sporting facilities, equipment, libraries were in a state of total decay. The physical condition of most schools was reported to be pathetic.

The report went further to indicate the scale of funding required to put the education system back on track – roughly 210 Million US Dollars – a ‘chicken change’, compared to the earning power of the Nigerian state.  It states:

The areas targeted for immediate attention and the estimated costs of the projects have been listed as follows:*

The costs given for each area are estimates but indicate the scale of funding – roughly USD 210 million – needed for the anticipated reforms.

On the issue of cultism in Higher Education, the report concludes:

The practice of cult activities is a problem that has its root in the society and has infiltrated the entire higher education system. The conditions in higher education institutions, such as overcrowding, deteriorated facilities, admissions malpractice and inadequately challenging academic programs have been blamed for encouraging the emergence of secret cults in the system. Cult activities have had an extremely negative impact on learning and discipline in the institutions.

Someone reading this article might argue, rightly of course, the 2000 World Bank report referred to above is eleven years old. Current information on Nigeria is hard to come by. Students writing a project on Nigeria can testify to this, so I have had to use the 2000 report since the only one I could reach. For the sake of such argument, let’s fast forward to 2010. Shortly after Nigeria hosted the 2010 conference of E-9 countries, in an article titled “sad state of education in the country, All Africa.com observed:

In most schools, the conducive physical and psychological environment for teaching and learning is absent. Basic facilities like desks and chairs, chalkboards, libraries, laboratories, toilets and sports facilities do not exist, especially in public schools, where even classrooms sometimes do not exist, or lack roofs! Teachers are poorly motivated, in many cases poorly trained or even untrained, with low self-esteem. Predictably, it is difficult to maintain professional ethics or high productivity under such frustrating conditions” (6 July, 2010).

The impact of many years of neglect of the education sector is not only fuelling poverty, crime, cultism, corruption and other social issues, it has considerably affected Nigeria’s ability to drum up a reservoir of knowledge-base to power centres of excellence and found the country’s competitive advantage in the emerging global knowledge economy. For example:

Research suggests that public policy plays an important role in shaping national innovative capacity by determining human capital investments and creating incentives for innovation. In recent years, the economic success of newly industrializing nations (e.g., the “Asian tigers”) has been linked to substantial prior investment in human resources (Sainta et al, 2003). Though Nigeria is projected by analysts as a sleeping economic giant/tiger, it is in fact a deformed giant, taking into consideration the short / long-term consequences of its education policy and system. This questions the wisdom, goals, and planning behind the Vision 2020 being promoted vigorously. Could this end up another white elephant with sunk billions and nothing to show for it?  For a plan that is due for delivery in 9 years time, where is the foundation, particularly in terms of quality of manpower, now and in the future, and the infrastructures to engineer and sustain this vision?