Anyone familiar with the history of colonisation, exploitation, and slavery in Africa and the scars of shame, divide and rule, humiliation, disunity,  and lack of self-confidence it left behind, can justifiably be forgiven for viewing China’s growing influence in Africa with suspicion. But should we?

..then the question arises as to how African heads of state and government could hold confidential meetings in a building they have no idea how it was wired. What guarantee do African governments have that every word uttered in the new headquarters in Addis Ababa is not heard in Beijing? What evidence negates the suspicion that all activities in the just completed building are not replayed on a large screen in Beijing as Chinese secret service agents watch?.

There are critical voices among Africa’s rulers. South African president Thabo Mbeki and his Nigerian counterpart, Olusegun Obasanjo have both criticized Chinese companies for violating labour and safety standards. Mbeki has gone so far as to warn against a new Chinese colonialism in Africa.

Anyone familiar with the history of colonisation, exploitation, and slavery in Africa and the scars of shame, humiliation, disunity, and lack of self-confidence it left behind, can justifiably view China’s growing influence in Africa with suspicion. For example, the amalgamation of Northern and Southern Nigeria in 1914 was purposely engineered to serve British interest and not Nigeria’s – i.e. enrichment and industrialisation of Great Britain through exploration, extraction and shipment of natural resources. With China’s growing interest and appetite for raw materials, has Africa reasons to be concerned?  The purpose of this article is to examine the motivations for China’s growing interest in Africa, the concerns born of experience and history, and precautionary options for Africa.  It is in the interest of Africa and China that attention is given to issues raised in this article.

China’s presence in Africa dates back the early years of independence in Africa, at the time when China itself was still under communist rule and frowned “on business and all things capitalist…They came to Africa to make friends, they built the first football stadiums and organised projects that the World Bank frowned upon… They set the fashion for our presidents, getting the likes of Kwame Nkrumah of Ghana and Julius Nyerere of Tanzania into Mao suits”(1). As a matter of fact, since 1955, China has sought international recognition and political allies, including Africa, hoping to strengthen international alliances against the capitalist West and the revisionist communist Soviet Union.

It is important to point out too that the origin of the relationship was not a one-way traffic with a passive Africa responding to Chinese overtures. “On the contrary, African individuals and governments of their own motion, initiated contact and sought relations with China; African liberation movements sought assistance from China from the 1950s and post-independence leaders such as Julius Nyerere of Tanzania and Kenneth Kaunda looked to China for models of political and socio-economic organization as the emergent African states embarked on nation-building in the 1960s”(2). As you can see, initially, China-Africa relation was founded on ideological solidarity.

The 1955 Bandung Conference, attended by 29 Asian and African states, aimed at promoting economic and cultural relations between the two continents. In that conference China and the African states adopted the five principles of ‘Peaceful Coexistence’ that had earlier been formulated by India and China. These covered (a) mutual respect for sovereignty and territorial integrity; (b) mutual non-aggression; (c) non-interference in each other’s internal affairs; (d) equality and mutual benefit; and (e) peaceful coexistence(3). Therefore China’s policy of non-interference in the national politics of sovereign nations is a long standing tradition shaped in part by bilateral agreements with other nations.

The Sino-African relationship was strengthened later by China’s ascension into the United Nations Security Council in 1971, the 1800-km Tanzania-Zambia railway construction, considered to be the biggest Chinese project on Africa in the 1970s, and offers of federal buildings, stadiums, palaces, factories, infrastructure, medical teams and student exchange programmes to loyal nations(4). Nationalist movements in Africa were supported in their demand for independence and denouncement of imperialism. Chinese government position on armed struggle, in those years of imperialism and apartheid, is reflected in a quote from the Peking Review of 26 January 1973:

the armed struggle is the only way through which colonialism, apartheid and racial discrimination in Southern Africa and Guinea can be eliminated”(3)

China contributed immensely to the consolidation of independence in Africa and to the liberation struggles in some countries like Zimbabwe and Mozambique.

FROM IDEOLOGICAL ALLY TO BUSINESS PARTNER

In December 1982, the Chinese Premier Zhao Ziyang was on a visit to eleven African countries to promote the ‘Four Principles’ of Chinese cooperation with Africa: equality and mutual benefit; an emphasis on practical results; diversity in form; and economic development. As from the 1990s the dominant image of China transformed from “ideological ally against colonialism, apartheid and Western domination to business partner and emerging economic colossus”(2). The China-Africa relationship shot to attention in November 2006 when 48 African heads of government attended a forum in Beijing. China “has been able to adapt its foreign policy to its domestic development strategy” to an unprecedented level by encouraging state-controlled companies to seek out exploration and supply contracts with commodity-producing countries. At the same time, Beijing aggressively courts the governments of those countries with diplomacy, trade deals, debt forgiveness, and aid packages (David Zweig and Bi Jianhai). It focuses on trade and commercially justified investment, rather than aid grants and heavily subsidized loans (Howard W. French of Columbia University)(5). But sceptics fear that Beijing’s interest in Africa is driven by self-interest and that it is prepared to ignore political, environmental and humanitarian considerations in its search for new markets. It is a valid concern and one that China and Africa cannot afford to sweep under the carpet. At the same time, such criticisms should not be allowed to slow down or discourage the flow of profit or aid driven and well-meaning developmental projects from China to Africa. African governments should be patriotic and professional in their dealings with China by negotiating terms that are favourable to both parties.

China-Africa co-operation has helped to reach the UN Millennium Development Goals and boosted common prosperity and progress, with China emerging Africa’s largest trading partner. The China-Africa co-operation has dual beneficial roles. On one hand it satisfies China’s hungry appetite for natural resources such as oil and gas (Angola), copper (Zambia) and iron ore (Gabon) to feed its rapidly growing economy. China is the world’s second-largest economy, after the United States.  An increasing number of foreign businesses are operating in China, which is often called the “workshop of the world.” More than 44,000 foreign operations, worth about $60 billion, were set up in 2005 alone (voanews.com). Its booming economy, which has averaged an annual growth rate of 9% for the last two decades, requires massive levels of energy to sustain that growth. In return, Africa benefits from much needed investment in basic developmental infrastructure, including new and better highways, school buildings, computer networks, telecoms systems and power generation6 (Table 1). For example in 2009, Chinese direct investment in Africa rose from $0.5 billion in 2003 to more than $9bn in 2009. Bilateral trade experienced a growth of over 43% to $120 billion (£76 billion Sterling) in 2011(7). Cheap Chinese imports are a blessing for many African countries while the gradual opening-up of the Chinese economy is providing opportunities for African companies, particularly those from South Africa. “But along these cheap goods has arrived the very disgusting phenomenon of imitated luxury items, with very low quality but sold at ‘middle prices’ way above their value. Today, one hardly knows the difference between a real Rolex watch and a fake one and in the process, people are short-changed” (Chief Bisong Etahoben, Yaounde, CAMEROON). 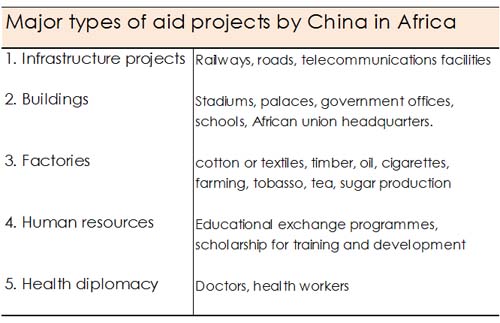 Its largest African suppliers of oil are Angola, Sudan, the Republic of Congo, Equatorial Guinea, and Nigeria. Other African countries that export oil to China include Gabon, Algeria, Libya, Liberia, Chad, and Kenya. Bilateral trade is growing at an annual rate of 28% over the past 10 years. As at the end of 2010, more than 2,000 Chinese companies had invested in the African continent and in diverse sectors of African economies including mining, agriculture, fisheries, tropical hardwoods, manufacturing, telecommunications, construction, entertainment, leisure and hospitality(8). It has offered resource-backed development loans to oil and mineral-rich nations like Angola, and developed special trade and economic cooperation zones in several states, including Nigeria, Ethiopia, and Zambia(5). “Cooperation in education, public health, culture and other fields maintains a good momentum. In addition, both sides have strengthened cooperation in human resources development. Continuing to grant scholarships to African students every year to study in China, the Chinese government hosted various study and training courses to help African countries forming professional contingents. Among which were the classes of advanced-studies for both Chinese and African management personnel and the training courses for young and mid-aged African diplomats. China also organized study-tours for high-ranking African diplomats to visit China and exchange experiences”(9).

While the West might be complaining of or growing suspicions of China’s growing influence (Fig. 1) and the impact on Western companies, the truth is that China offers enticing options to Africa including, (a) “no-string” attached aid policy. “Critics say China’s approach has emboldened unsavoury governments, allowing them to ignore Western calls for reform, safe in the knowledge that Beijing will take up the slack”6; (b) China believes it is in Africa as equal partner seeking a harmonious world and coaxing Africa along the path of development, and not a domineering colonialist; (c) “China consistently respects and supports Africa..It never imposes its own will on African countries, nor interferes in the domestic affairs of African countries” (Yan Xiao Gang). On the other hand major contracts go to Chinese companies, perhaps because they possess the technology and work ethics more likely to meet China’s schedules. Chinese companies create employment though paying low wages; however African workers benefit from new skills, though this has been contested by concerned voices across Africa as will be discussed later.

Aside from non-confrontational and non-interference policies of China, there are extra-ordinary aspects of China and its policies that fascinate African governments and intellectuals eager to see Africa break free from a cycle of poverty, wars, corruption, economic slavery, and under- development.